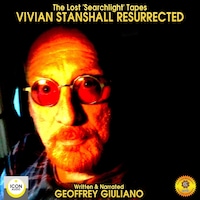 2h 7m
LektorGeoffrey Giuliano
RodzajAudiobook
Kategorie
BiografieBiografie artystówLiteratura faktuMuzyka i filmyEnglishNon-Fiction
Udostępnij książkę
Vivian, the headmaster of the Bonzo Dog Doo Dah Band, was also a singular author, poet, painter, actor, and iconic British eccentric. This unique audiobook offers rare insight into the brilliant clockwork mind of this late British national treasure. Renaissance man Stanshall holds forth on a number of insightful topics relating to his turbulent life and enticing, inspirational, evergreen work. This in-depth production also includes a concise one-hour biological overview of Vivian’s life as well as the personal remembrances of his close friend and longtime colleague, Giuliano.
Stanshall was the quintessential, offbeat pop icon of the 60s, 70s and 80s. His tales of the upper-class Rawlinsons and Maynards are perfect fare for anyone with a warped sense of humor. Born Victor Anthony Stanshall, March 21, 1943, Shillingford, Oxfordshire, his post-WWII family settled in the coastal town of Leigh-on-Sea, Essex. From teenage bingo-caller to painting fairground attractions (and a spell in the merchant navy), Viv enrolled at London’s Central School of Art and Design. It was there in September 1962, he met Roger Ruskin Spear, Rodney Slater and Neil Innes (the latter attended nearby Goldsmiths College) and, with other equally unorthodox musicians, formed The Bonzo's. They appeared in the Beatles ' Mystery Tour' movie in 1967, to an off-kilter top 10 hit with `I’m The Urban Spaceman’ a year later, As the Dogs decided to split in early 1970 (after four LPs: `Gorilla’, `The Doughnut In Granny’s Greenhouse’, `Tadpoles’ and `Keynsham’), it presented an opportunity for Viv to explore his inner-madness on a few now highly collectable 45s. Contractual duties led Viv back to the Bonzos for 1972’s 'Let’s Make Up And Be Friendly’ – showcasing his sophisticated, spoken-wordsmith’s introduction to Sir Henry, via the 9-minute `Rawlinson End’.